ADoors are actors that act as a door. Their name is an amalgam of Actor and Door.

ADoors have one door that either slides or rotates, usually for the purpose of opening and closing, allowing actors of the same team through a path, but acting as an obstacle to enemies.

The actor itself usually plays the role of the engine of the bunker door, playing an animation when the door moves.

They detects actors of the same team using sensors, which are invisible rays cast between two positions defined in relation to the ADoor through Offsets.

As well as all variables used by Actors.

Sensors detect actors and cause the door to open.

This image should help you with figuring out how this stuff works. In the image example, The door from The Bridge Door mod (TroubledWaters.rte) is used. The door, on sensing that an actor is on either side, lowers, and allows the actor to cross a gap. 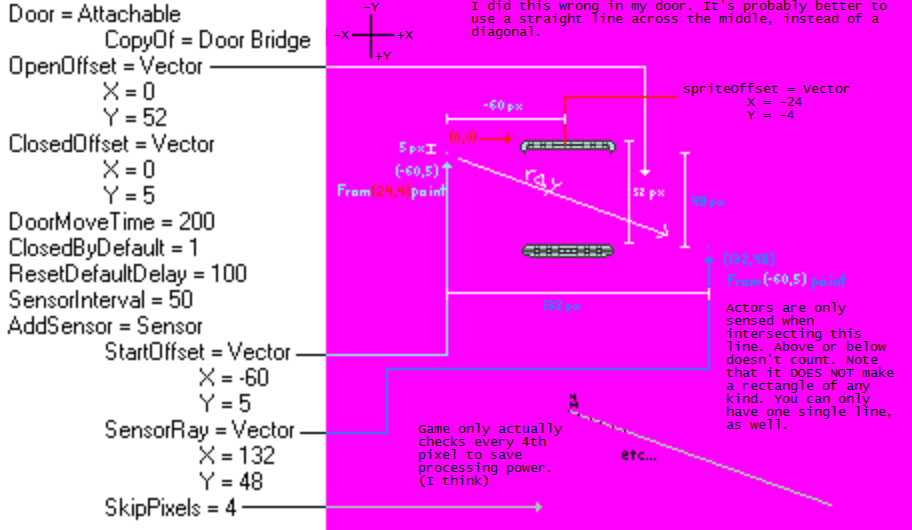 Note: "Actors are only sensed when intersecting this line" That means that an atom from the actor has to physically be on one of the same pixels as the line. As long as an actor is in the line, the door will stay open. Also note that I should have used a straight line, like Data does in his Doors. If the line is at a diagonal like that, then an actor might crawl under the sensor on one side. It won't make much of a difference for small doors, but for big doors, that could be a problem.